The following post argues that there will be no transformation in the energy sector, until there is both a need in society for renewable energy, a willing government, and a public demand*.

Being a sustainability geek, visiting New York City was a dream come true. New York City has one of the most ambitious green infrastructure plans in the world –and they have a lot of green roofs, which I absolutely love. In fact, they plan to put green structure on 10% of NYC’s non permeable surfaces by the year 2030, this being in the form of green roofs, pocket parks and the likes.

Green structure will function as both stormwater management, relieving stress on the sewer system, a rain water purifying filter and, where the green structure is in the form of a green roof, will save energy on both heating and cooling.

The best part; it’s cheaper than fixing up the sewer system. Hurray! So little Miss ecogeek here was thrilled about visiting this magical green structure wonderland. I went there in late December 2010, 2 days before the big blizzard hit (lucky me for not stranding). 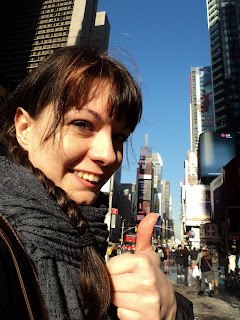 If you’ve been to NYC in the winter, or any American city I fear, you will know that it is very draughty. I was shocked! Shocked and very cold. No matter what building I entered, I felt that draught. I started becoming obsessed with it, spotting the single layered windows, and the doors without weather strip, wondering how much, if any, insulation was in the walls.

My green wonderland had turned out to be one big waste of energy. Not mine, but the inhabitant’s of New York. I kept thinking about all that heat and hence all the money slipping through the endless cracks, and unsealed doors in the buildings.

To make matter worse, the buildings are heated by a local furnace or electrical heathers which are very energy inefficient compared to a heat- and power plant, where waste is burnt to create heating and electricity. Instead the NYC waste is going to landfill, and the buildings are being heated with non-renewable, and costly oil. My eco heart was broken. How could this be?

I was fortunate to have lunch with a journalist one day, and we had a talk about it. I told him about the conditions in Denmark where we, as mentioned in a previous post, have fairly good insulation in our buildings. He said to me, “Yeah, but we didn’t have any wars, so we didn’t need to rebuild our city, and therefore didn’t put in more insulation, or double layered windows.” Then the lunch ended and so did the conversation. I couldn’t let it go, because well, Denmark didn’t have wars either.
In Denmark, land of the cozy, we haven’t seen wars for 70 years. We’re a comfy crowd, and even in World War II when we were occupied by Germany, nothing got bombed. So why aren’t our buildings draughty?

What caused Denmark to rethink and redo its energy system, was the oil crises of the 70’s, combined with a government with high focus on the environment, and a public demand for cheaper, safer energy.

It’s a 3 point system, the tripod if you will.

There must be a need in society, that pressures for action. There must to be a government who is willing to execute elaborate plans. And there must to be a public that voices and influences in which direction the plans should move.

The 70’s oil crises shock the global notion that we will always have enough affordable oil. Let’s compare situations. Was the US affected by the 70’s oil crisis? Yes, but back then they had a rising oil production, so their outlook was that they could be almost self sufficient. Denmark on the other hand was in trouble. We needed something to free us from the dependence on forging oil (since we had none back then), and fast.

The Danes got to work.

We build and integrated heat and power plants, and then exported the knowledge and technology to other countries. We invested hugely in windpower, paving way for the Danish windpower company Vestas, the leading in its field. We gave subsidies to home improvement, such as double layered windows and insulation, thus enabling regular folks to make the necessary improvements. The demand for insulation also made the Danish company Rockwool, the leading insulation company in the world. When life hands you lemons… 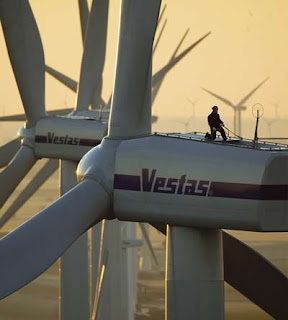 Government investments and subsidies, created leading companies in the field of renewable energy and energy savings.  Now you might say “Oh, but this is obviously the makings of a socialist state”. Well no, the government initiatives came as a response to the public demand for cheaper, safer energy, and of the public discourse that renewable energy was good, and nuclear power was bad.

The public had a strong voice, rooted in strong, organized, cooperating environmental NGO’s. If you wanna keep being the elected official, you listen to that public voice, and you give them what they want. Of course by doing so you always risk losing voters that would rather have tax cuts than cheaper energy, so as an elected official, you must have the will to act. It’s common sense really, but 30 years later we forget why or how this change happened.

To sum up, in order to achieve change in the energy sector there must be a need in society, a government that is up for a lot of policy making, and a public demand for change.

Eventually a need in society will come by itself. We have a lot of potential scarcity crises waiting around the corner. It’s gonna hurt, but at least we will have one of the 3 pillars to push for change. Now all we need is a Government with willpower, and a public with a voice.

Oh, by the way, I was writing notes for this in a draughty NYC apartment in lower Manhattan.

I’ve separated need and demand in this post. You could ague that a need will trigger a demand, but this mostly goes for urgent needs. Once we, as a global society, are in urgent need of a more sustainable energy supply, it will be to late to efficiently, and smoothly make the transition. And on the other hand, you can have a public demand, that doesn’t necessarily have a matching need – like the public demand for a death star.

3rd world problems in a 1st world country – why more attention to mitigation...
Scroll to top