Denmark has in recent years had above average rainfall resulting in above average flooding, many of them record breaking. Like the extreme rainfall of July 2nd 2011 in Copenhagen that resulted in massive flooding all over the city and left 50.000 households without hot water. That amount of rain was described as a statistical abnormality, one that should only occur every 300-500 years (Director of water and sewage in Copenhagen’s energy department). The picture below is from that flooding. 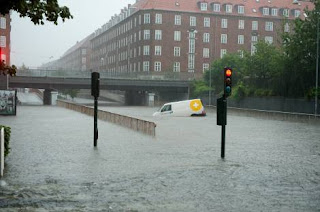 On August 14th Copenhagen again experienced heavy rainfall, this time with less flooding, but it was enough to damage the worn and old sewage system, and the fresh water pipelines came into contact with rain and sewage water. On the 18th of August a warning was issued in Copenhagen. Doe to water contamination citizens must boil the water before drinking it, showering in it or using it for dish or cloth washing. On the 23rd of August the problem still affected 40.000 citizens which still had to boil their water. It has been underlined that this was a special event, an unlikely combination of heavy rain and a malfunctioning pipeline. A double accident if you will. From a risk management view this isn’t something that should be feared because it’s too unlikely.

Denmark is a 1st. word country, one that isn’t used to water contamination or having to import drinking water. We have good infrastructure and good health. Denmark is a well-oiled machinery that ensures its citizens an almost sickening level of security and comfort. But we have to make some swift decisions if we want to keep that up. The sewage problem must be delt with. The pictures below are from my building block as it is gearing up to change some of the bad pipes. Sights like these are common in Copenhagen these days. 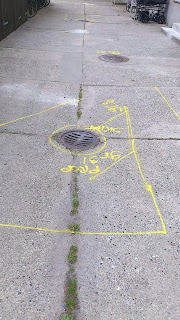 Meanwhile the electoral race is on, and the hunt for votes has got the political parties presenting one elaborate plan after the other on how to best serve citizens. But not a single party or candidate has mentioned the sewage problem. It’s commonly known that the added run-of from re-pavement of the city, combined with heavier rainfalls, exceed the capacity of the sewer, but still no one is addressing the problem. Mitigation needs to have a place on the public agenda next to health care and taxes, because ignoring the need for mitigation will only ad costs to our health and our national bugged. For once we actually need to talk more about the weather and how to deal with it. 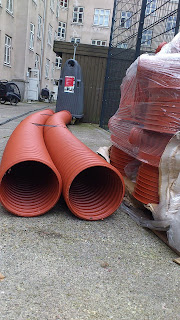